Our Interview with Radu Daniel Hurmuz! 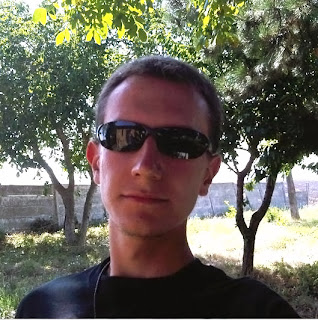 My name is Radu Daniel Hurmuz, I am 23, living in London. My background is in electronics and software development, but I have always had a passion for writing and storytelling.

Ever since I can remember, I have been drawn to fiction of all sorts and from diverse genres, ranging from war novels such as Jarhead and the works of Sven Hassel to high fantasy like Lord of the Rings and science fiction of all shapes and sizes (Dune, Starship Troopers, The Forever War etc.)
Through my writing, I enjoy exploring the motivation of characters that stand opposing one another. It always seemed to me unrealistic how people divide the world in black and white, good and evil. At the end of the day, they're all simply points of view, and I hope readers of my upcoming novels will enjoy seeing the main conflict from the two different perspectives and understand the motivation that drives everyone into a clash of ideologies.
Being born in Bucharest, Romania just a year before the revolution shook the country; I have heard horror stories growing up of what happened in those days. This one event and many others have made me curious for answers and the real truth behind what we hear every single day on the news. The most prominent view that I give credence to is that the world truly is made up of shades of grey and nothing is as it seems until you get to the bottom of it.
I always look for a sense of synergy in my life through everything that I do and enjoy. From music, books and films to concerts and rock-climbing, I seek fulfilment every day in order to enjoy life to the fullest.

The title of my book is "Mind Fields: Volume One", the first in a series of novels I am looking to publish over the next couple of years. This first book will most likely hit Amazon by the end of February or March. I will have a better date in mind as soon as the editing is finished.

It was our pleasure to get a chance to get to know a bit more about Radu and his dream of getting his first book published! We get an opportunity to visit with with an author before he is published. His book Titled "Mind Fields: Volume One" sounds like it might be a psychological thriller. So sit back and get comfortable and please give a warm welcome to Radu!


1) What makes for a good hook in your stories? Where does your inspiration come from?
In order to attract a reader's attention, I try to tell a story that they have never heard before, or one that has been around for years but seen from a new perspective. I try to make my characters as believable as possible, their motivations clear and the situations they find themselves in to be plausible, even in the novel's world. The question of inspiration is one that I could write essays about, mostly because of my intrigue with thought-processes and the idea of original thoughts, but I will try to keep it short.
Inspiration is not something that strikes in the middle of the night like an assassin; it's a nexus of thoughts and ideas that coalesce into a scene, a dialogue or a new perspective. I draw most of my inspiration from music, imagination and dreams. Some people that I have spoken to say that music and books are like water and oil but I disagree. With enough imagination, every single note can be a motion or a thought in the character's mind. And when you hear one line of a song, it can be the spark that leads you down a path in your head and points you to a story that you never thought you knew.
2) Are you an organized writer? Do you do things like take notes and make lists of characters? Or do you free write and work it out as you go?
What I prefer doing is not writing anything down. You see, when you first come up with an idea for a story it is limitless. However, the moment you set anything down on paper it diverges from the original thought and ends up somewhere on a back alley behind a dusty old building when it should have actually been the main avenue into town. The moment I come up with an idea I keep it in my head and then I try to connect it from beginning to middle to end, from scene to scene, like a 20-hour film. After I have most of the scenes complete in my head, I write a paragraph for each chapter and leave the rest swirling between my neurons to be put down on paper in all its detail when the moment comes.
The characters themselves have to be real to me. As such, I look at them not just as characters in a story, they must have a history. Their actions in the novel must be just a period in their lives, rather than the entirety of their existence. Once all these people are alive in my mind, then I can let them loose and see how they would interact with others, what they would say, how they would behave. The novel must be a snapshot of a life.
3) What is your normal writing day like? Do you write when you are inspired or do you have a schedule?

thank you for stopping by and visitng our page!